The Ten Most Expensive Champagnes on the Planet 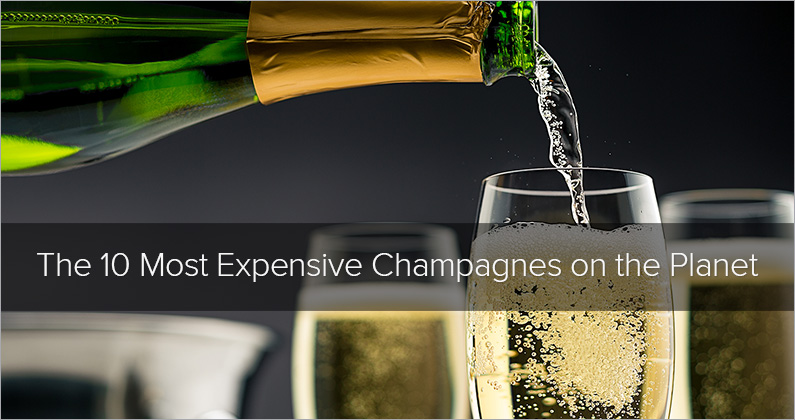 The world of Champagne and sparkling wine is, to say the least, both intricate and complex. For starters, there is the familiar word Champagne, which is only the sparkling wine that is produced in the Champagne region of France and then there is Cava, Spain’s version of champagne. Then there is Prosecco, the sparkling wine of Italy, and if you are in the United States or Australia, it is Sparkling wine. Then there are all the different flavors, textures, and dosages – that is, the amount of residual sugar that is leftover after the second fermentation. Needless to say, there is a lot to learn about the world of sparkling wine! If you would like a simple crash course on learning about bubbles, head over to our blog called Sparkling 101: A Crash Course in Bubbly.

Sparkling wine was invented in the 1700s in France. It began as an experiment for the King, Queen and their nobility. Not long there after, the process known as the Methode Champenoise was perfected by none other than Dom Pérignon himself, a Benedictine Monk. Among being the most intricate and storied, Champagne is also some of the most expensive wine in the world, a renown and title that it bears most proudly. Let us take a look and discover the top ten most expensive Champagnes and sparkling wines on the planet. These brands of wine are so exclusive, that most often, they are only available in private social clubs or by special order. Depending on vintage and collectibility, some bottles have even been sold at auction for millions of dollars. This fascinating blog by Finances Online shows what some of the world’s most prolific collectors have spent on particular vintages at auction. For example, can you imagine trying a bottle of Champagne that was recovered from a 1741 shipwreck? With the bottle being submerged in cold temperatures and no light, we can’t help but wonder how it aged and would taste today! But we’re willing to guess that the collectors who purchased the shipwrecked Champagne didn’t open the bottle at all. Read on to discover the top ten most expensive Champagne brands today. Now one of the most famous icons of luxury, Moet was founded 1743. It is now part of the Louis Vuitton, Moet & Hennessy (LVMH) dynstasy. The 1869 vintage embarked a methode that embodies the unique Moet & Chandon style; a style that distinguishes itself by its bright fruitiness, seductive palate, and elegant maturity.

Retail prices of 750ml Moet & Chandon’s Grand Vintage, depending on the vintage, fetch upwards of $200 per bottle.

One of France’s most famous Champagne houses, Perrier-Jouet was founded in the mid-1800s and was one of the first houses to ship Champagne to the UK and the USA. Most renowned for its floral bottle of the Belle Epoque, Perrier-Jouet owns 266 acres of vineyards in Champagne and consistently rates 95% by France’s standard.

With high ratings and highly collectible bottles, Perrier-Jouet fetches upwards of $200 – $400 per bottle, depending on vintage, varietal and availability.

Piper-Heidsieck is a Champagne house founded by Florens-Louis Heidsieck in July 1785, in Reims, France. Heidsieck joined with Piper in October 1839. It is renowned for high barrel scores and popularly served in restaurants as it makes a wonderful pairing.

Bottles of Piper-Heidsieck Brut will set Champagne lovers back between $300 – $500 depending on vintage and availability.

At the young age of 27, the Madame Clicquot found herself a widow and the owner of her departed husband’s Maison de Champagne. In a time when a woman running a business was totally unheard of, Madame Clicquot took her Champagne House to the very top, making the name Clicquot itself synonymous with luxury. Always rated over 90 points by Wine Enthusiasts and other critics, Veuve Clicquot’s Prestige Cuvee, La Grande Dame, is a great wine which pays homage to a very “grande dame de la Champagne,” Madame Clicquot.

A 750ml bottle of Veuve Clicquot La Grande Dame retails for around $300 today, while certain vintages have fetched upwards of $2,000 at auction. For wine lovers, “Come quickly, I’m tasting stars!” is perhaps the most recognizable quote in wine history, right up there with Alexander Graham Bell and Neil Armstrong. It came when Benedictine Monk Dom Pierre Pérignon accidentally (according to the legend) sent his white wine into history with a second fermentation – the introduction of naturally created effervescence which he called stars in the mid 17th century.

Currently, Dom Pérignon‘s most expensive bottle of Champagne retails for about $400.00 for the P2 Plenitude, an extended tirage Champagne that is aged for 15 years. One bottle of 1996 Dom Pérignon sold at auction for $49,000!

In the tiny village of Chigny les Roses, the Cattiers have owned and cultivated elite Champagne vineyards since 1763, so as you can see, this one family has spent hundreds of years perfecting the art of Champagne production, and the meticulous practices are put to use in each Armand de Brignac cuvée.

Salon is a unique Champagne to say the least. All the focus in the making of this exceptional wine is on the singular. It was originally the product of one man, Aimé Salon; from one region, the Côte de Blancs; from one cru, Le Mesnil-sur-Oger; from one grape variety, Chardonnay; and from one vintage, with no blending at all. Champagne Louis Roederer was founded in France in 1776, and ever since, the wine has become increasingly synonymous with prestige. Amazingly, Louis Roederer vineyards rate an average 98 percent based on France’s statutory 100-point classification scale.

Some bottles of Brut Cristal have fetched retail prices of $700.00 and up, depending on the vintage. Rated 99 points by James Suckling, the 2008 Louis Roederer Cristal Rose retails for $650.00.

Members of the British Royal Court were among the first people to help Bollinger make a name for itself. The Champagne House’s first vintage appeared in 1829. Today, the House owns nearly 400 acres in best Grands Crus and Premiers Crus villages.

Available bottles of Bollinger go for around $300 retail, but this makes the #2 spot on the list as certain vintages go for upwards of $2,000 per 750ml, depending on vintage. Since 1843, six generations of the Krug Family have been creating the finest and rarest Champagnes. Krug Grande Cuvée is the flagship of the House and the epitome of Krug’s craftsmanship: a blend of more than 120 wines from ten or more different years. Its exceptional flavor is the result of a stay of at least another six years in the cellars. Over twenty years are needed to craft each bottle of Krug Grande Cuvee.

On average, a bottle of Krug starts with a retail sticker of around $600, climbing to $3,000 and upwards.